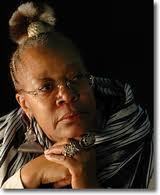 Gabon shares borders with Equatorial Guinea to the northwest, Cameroon to the north, and to the south and east with the Republic of the Congo. To the west is the Gulf of Guinea. The population of Gabon is 1 500 000 and she covers an area of about 270 000 kilometers squared. Libreville is the capital city. Gabon gained independence from France in 1960. Gabon has ushered in certain constitutional reforms since then. It is one of the most prosperous countries of Africa with a high Human Development Index and the third highest per capita income after Botswana and Equatorial Guinea.

Justina Mintsa, left is novelist. She is the author of Awu's story.   "Histoire d'Awu (Awu's story) is a good read on many accounts: first, it offers an interesting take on the life of an ordinary, yet charismatic woman, in a remote African village at the dawn of the twenty-first century. It is equally stimulating in its attempt to downplay the hiatus between tradition and modernity in shifting the tenets of both concepts to the periphery of the main character's preoccupations and existential quest. Awu is well attuned to the demands of tradition and submits willingly to its obligations but, paradoxically, she also fits perfectly the mould of a stereotypical modern woman: she is responsible, well-educated, brimming with energy, financially independent and keen to live with someone she loves. She brings modernity to the very heart of tradition without falling into the trap of Western ideologies and rhetoric. To her, modernity is not discontinuous with the past, yet it does not repeat unquestioningly the power structures, behaviours and values of days of yore. Modernity, Awu style, is based on a conception of the here and now that leans on local experience and practical wisdom, rather than imported notions of development and enlightenment inspired by the West. A book written ten years ago, but still very much ahead of its time in its vision of Africa and the world." Read the beginning of this review here...   http://aflit.arts.uwa.edu.au/revieweng_mintsa12.html  Add more writers.