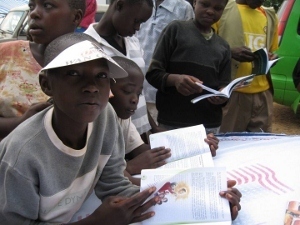 PEN Kenya has been active in the defenceof freedom of expression years before the organisation could be registered.http://www.penkenya.com/ . After President Moi's exit in 2002, PEN Kenya was registered in 2003. The test on Kenyatta's government commitment to freedom of expression was a paper written in Kiswahili and titled "Kenya Twendapi" by Abdulatif Abdalla, a renown poet. A literal translation of the title in English, "Kenya, where are we headed to?" In Kiswahili, that title conveys deep concern and is almost in tragic apprehension. Kenyatta detained the author. In prison, Abdulatif Abadalla wrote another Kiswahili title: Sauti ya Dhiki (Voice of Agony). Kenyatta had incarcerated the messenger but not the message. Among Kenya’s strongest dissidents have been writers who wielded not only strong pens but also wills of steel as they spoke what they wrote and in some cases dramatized it. Theatre holds a key moment in Kenya's history of free expression. In the essay "The Language of African Theatre," published in English his book, Decolonising the Mind, Ngugi tells a powerful story. The village of Kamirithu invites its own writer as Ngugi was born there to a literary engagment. It is a poignant moment. There is a shift from classroom walls to the village grounds.  Ngugi Wa Thiong'o was then the Head of the Literature Department at the University of Nairobi. The Sunday morning persistent caller  pleaded with him to take what he was teaching at the University of Nairobi to home. An African woman speaking in her mother tongue with a  literary expert  and asking for that which is shared at the University is a powerful symbol. It is dramatic in itself.  Soon the villagers made an open stage. The play they staged was titled Ngahika Ndeenda in Gikuyu. This translates to "I will marry when I want." The government banned it. The Trial of Dedan Kimaathi by Micere Mugo and Ngugi Wa Thiong’o was also too strong for President Kenyatta. The connection with the grassroots in language and ideology is a force that can shake any dictator. Can one detain a whole people? No. Kenyatta's government went for the writers fast. Together with Betrayal In the City, written in 1977, by Francis Imbuga, this drama  was threatened with their performances being limited and sometimes denied in the last instance. It is when words have sprang from the ground, become pregnant with the power to threaten the status quo, when faces and words are easy to link in print and in action that authoritarian rule is shaken.  Micere Mugo who was the Dean of the Faculty of Arts at the University of Nairobi was arrested and harassed many times. Both writers ended up in exile to date. The producer of The Trial of Dedan Kimaathi, Seth Adagala was questioned by the Central Intelligence Department (today named NSIS). The people's engagment translated into real life and was unshaken. The attempt of Ngugi Wa Thiong’o to return after the Moi regime was over, was thwarted by incredible machinations of the former regime which led to his own as well as wife’s serious attack, rape and theft in 2003.

Kenya named after its highest peak Mt. Kenya lies on the equator. Mt. Kenya is Africa’s second highest peak. She shares borders with Ethiopia to the North, Sudan to the North east, Somali to the North East, Tanzania to the south and Uganda to the west. Kenya has a long coastline with the Indian Ocean.  Kenya has a land area of 580,000 km2 and a population of nearly 41 million. The people of Kenya gave themselves a new constitution on the 27th of August 2010. In it all freedoms are guaranteed.  Before then, the nation which fought and won independence from the British in 1963 on June 1st, now celebrated as Madaraka or self governance day, had been ruled by the Lancaster constitution made and passed in England. The constitution had been amended extensively often to suit the whims of the Kenyan powerful but not to benefit the ordinary people or protect  human rights. The August 2010 Constitution is one for the people. It has already been used to start steps to safeguarding the independence of the judiciary. This will have an impact on freedom of expression. The Kenyan press has for a long time decried the high payments that are awarded for libel cases taken to court by politicians. Openness is taking root and it is defended by the people. Judges have been vetted by the public too in Kenya, a feat the Head of the European Union in Kenya said even Europe has failed to accomplish.The current Chief Justice, Dr. Willy Mutunga was interviewed with public participation. He won the post in an competitive process. In the history of Kenya until now, all Chief Justices had been picked by the president. The result of the new constitution is far reaching. Kenya will be governed by governors in the 47 counties which will be not be governed from Nairobi, the capital city. This is devolution of power. Kenya’s literature is as diverse as its many peoples. All the communities have Oral literature and not all of it can never be recorded. There is copious literature in Kiswahili. Ngugi Wa Thiong'o, a writer of international repute, writes in Gikuyu and translates his works into English. He decided to do this after his first successful works published in English. His decision has been debated and continues to be of interest to many.  English language literary forms such as the novel, written drama and short stories as opposed to oral literature began to exist after the coming of independence with among the first and famous novels being: Weep not Child,1964, by Ngugi Wa Thiong'o, The Promised Land by Grace Ogot  1966,  and The River Between in 1967 by Ngugi Wa Thiong'o. It is not said often enough that writer Grace Ogot Kenya's first recorded female novelist published her first short story in 1962. She is writes fine literature in English and is an orator in Dholuo.

The Constitution of Kenya, August 2010, guarantees Freedom of Expression with elaboration:

33. (1) Every person has the right to freedom of expression,
which includes—
(a) freedom to seek, receive or impart information or ideas;
(b) freedom of artistic creativity; and
(c) academic freedom and freedom of scientific research.
(2) The right to freedom of expression does not extend to—
(a) propaganda for war;
(b) incitement to violence;
(c) hate speech; or
(d) advocacy of hatred that—
(i) constitutes ethnic incitement, vilification of others or
incitement to cause harm; or
(ii) is based on any ground of discrimination specified or
contemplated in Article 27 (4).
(3) In the exercise of the right to freedom of expression, every
person shall respect the rights and reputation of others.
34. (1) Freedom and independence of electronic, print and all other
types of media is guaranteed, but does not extend to any expression
specified in Article 33 (2).
(2) The State shall not—
(a) exercise control over or interfere with any person engaged in----