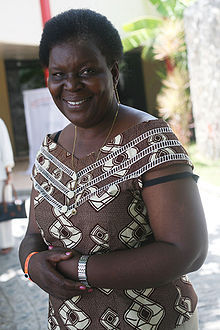 Paulina Chiziane is a writer and politician. She writes novels and short stories in Portuguese-

http://en.wikipedia.org/wiki/Paulina_Chiziane Mozambique, officially the Republic of Mozambique, lies in South Eastern Africa. She is bordered by the Indian Ocean to the east, Tanzania to the north, Malawi and Zambia to the northwest. Zimbabwe lies to the west and Swaziland and South Africa to the southwest. The capital city is Maputo, formerly known as Lourenço Marques. Other cities in the country are Beira and Quelimane which along with the towns along the coastline, have a Swahili town origin under the Sultanate of Zanzibar.

Between the 1st and 5th centuries AD, Bantu-speaking peoples migrated from farther north and west. Swahili-Arab, commercial ports existed along the coasts until the arrival of Europeans. The area was explored by Vasco da Gama in 1498 and colonized by Portugal in 1505. Mozambique became independent in 1975, and became the People's Republic of Mozambique shortly after. The country was engulfed in  intense civil war lasting from 1977 to 1992. Mozambique is endowed with rich and extensive natural resources. The country's economy is based largely on agriculture. Industry mainly: food and beverages, chemical manufacturing, aluminium and petroleum production is growing fast.

The country's tourism sector is also growing. South Africa is Mozambique's main trading partner and source of foreign direct investment. Belgium, Spain, and Portugal are also among the country's most important partners. Since 2001 Mozambique is one of the world's top ten for annual average GDP growth. However, the country still has one of the lowest GDP per capita, one of the worst human development index and one of the highest levels of inequality in the world.The only official language of Mozambique is Portuguese, with roughly half of the population speaking it as a second language and few as a first language. Languages widely spoken natively include Swahili, Makhuwa, and Sena. The largest religion in Mozambique is Christianity, with significant Muslim and African traditional religious minorities. Mozambique is a member of the African Union, Commonwealth of Nations, the Community of Portuguese Language Countries, the Latin Union, Organisation of Islamic Cooperation and Southern African Development Community.

CONSTITUTION OF THE REPUBLIC OF MOZAMBIQUE
Is approved on the 16th of November 2004 and signed by President of the
Assembly of the Republic Joaquim Eduardo Mulembwe
and published. It is also signed by President Joaquim Alberto Chissano
This constitution is accessible only in Portuguese and English
The constitution of Mozambique guarantees freedom of expression which it names in the first few lines of its introduction here:-
"Meeting the age-old desires of our people, the armed struggle for national
liberation, whose purpose was to liberate the land and Man, brought together all
the patriotic sectors of Mozambican society in the same ideals of freedom, unity,
justice and progress. When national independence was won on the 25th of June 1975, the
Mozambican people were given back their fundamental rights and freedoms.
The Constitution of 1990 introduced the democratic rule of law, based on the
separation and interdependence of powers and  on pluralism. It laid down the
structural parameters for  modernisation, making a decisive contribution to the
beginning of a democratic climate that led the country  to its first multiparty
elections.
The Constitution reaffirms, develops and deepens the fundamental principles of
the Mozambican State, and enshrines the  sovereign nature of the democratic
rule of law, based on pluralism of expression and partisan organisation and on
respect for and the guarantee of fundamental rights and liberties of citizens.
The extensive participation of citizens  in making this basic law conveys the
consensus to strengthen democracy and national unity, which  flows from the
collective wisdom of the people. Now therefore, the Assembly of the Republic determines:
http://www.wipo.int/wipolex/en/text.jsp?file_id=179636