Nigeria is in West Africa and shares borders with Benin in the west, Chad and Cameroon in the east, and Niger in the north. Its coast in the south lies on the Gulf of Guinea on the Atlantic Ocean. 9000 BCE is the year said to mark human habitation in Nigeria. Wikipedia- “The area around the Benue and Cross River is thought to be the original homeland of the Bantu migrants who spread across most of central and southern Africa in waves between the 1st millennium BCE and the 2nd millennium. The name Nigeria was taken from the Niger River running through the country. This name was coined by Flora Shaw, the future wife of Baron Lugard, a British colonial administrator, in the late 19th century.” In The Vanguard News, a cyberscpace blogger is questioning Nigeria’s literary output. Nigeria’s literature is recognized in Africa as dynamic and noteworthy. he Vanguard News wants us to go beyond what is seen as the dictates of the local limitations with regard to language.http://http://www.vanguardngr.com/2011/07/new-nigerian-writers-are-in-need-of-spirit/

There are 527 languages in Nigeria. Those languages are not dialects. Two of these are second languages without mother-tongue speakers, and 11 have no known speakers.  Nigeria is the home of the Nobel Prize for Literature, Wole Soyinka and the famed novelist Chinua Achebe. Nigeria has the highest population in Africa and is a powerhouse of the written and spoken word. Nollywood has grown immensely. Nigeria has one of the fastest growing economies in the world.

It is interesting to juxtapose the views of Chinua Achebe from Nigeria and Ngugi Wa Thiong'o two well known writers on languages. They differ sharply. 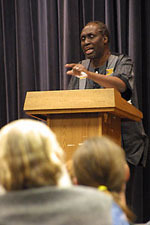 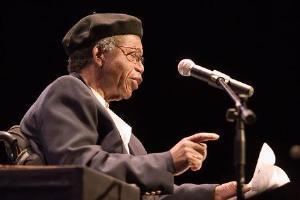 West Africa: Chinua Achebe (left) “I feel that the English language will be able to carry the weight of my African experience. But it will have to be a new English, still in full communion with its ancestral home but altered to suit new African surroundings.”

East Africa: (right)  Ngugi Wa Thiong’o “How did we arrive at the fatalistic acceptance of the unassaiblable position of English in our Literature.... Berlin of 1884 was effected by the sword and the bullet. But the night of the sword and the bullet was followed by the morning of the chalk and the blackboard. The physical violence of the battlefield was followed by the psychological violence of the classroom. But where the former was visibly brutal, the latter was visibly gentle, a process best described in Cheikh Hamidou Kane’s novel Ambiguous Adventure where he talks of the method of the colonial phase of imperialist as consisting of knowing how to kill with efficiency and to heal with the same art.” Ngugi has written for many years in his mother tongue, Gikuyu. Both the excerpts above are from Ngugi's essay 'The language of African Literature in Decolonising the Mind' What about a different generation of writers? One from Kenya says: "Mother toungue? No thanks!" Others are writing poetry and books in their mother tongues.